The 2008 presidential campaign was dominated by four powerful women—Hillary, Sarah, Michelle, and Amy. You probably don’t recall Amy. However, Amy was at the center of how the Obama campaign created the most engaging and powerful web experience, not only in political history but possibly in web history. This was a user experience that so overwhelmed the McCain camp as to make one wonder if McCain actually knew the web existed. In brief, here is Amy’s story and how she expanded our understanding that Web 2.0 user experience design is more science than art and more MTV than CNN. 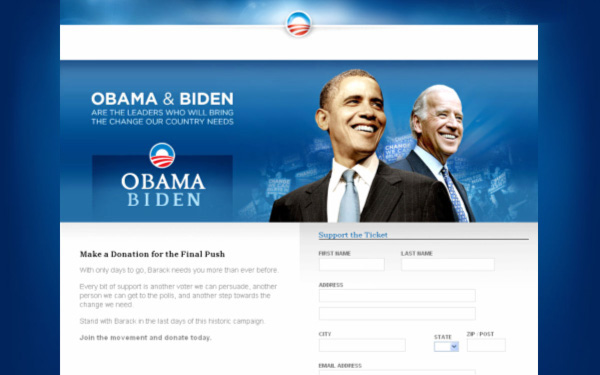 Following the Obama victory the traditional media, and even technorati, were effusive about the Obama campaign’s use of Web 2.0 technology. However, neither group provided real insight into what made the Obama web experience so powerful. For the most part, Web 2.0 technology has been massively overrated and misapplied. These new tools have failed to deliver on their promise of building user engagement platforms that transformed the web into vast interconnected networks for driving corporate profit and increasing brand engagement. Over the past 3 years, our firm has conducted extensive post-mortems on sites that injected huge sums into Web 2.0 implementations. From this research, we learned, among other things, that: 1) Web 2.0 user experiences are very difficult to integrate into traditional page-based user interaction models and 2) Web 2.0 tools are far more complex for users to understand and utilize than most realize. This last point is where Amy came in.

Amy is a young “twenty-something” who taught millions of potential Obama supporters how to set up and make use of the Web 2.0 tools known as “MyBO”. She did this by way of a deceptively simple video posted on the Obama site which was accessible to individuals interested in volunteering for the Obama campaign. The video could be played before signing up at the following link. In about 6 minutes, the Amy video translated to potential supporters the benefits and technical issues of making use of the MyBO 2.0 tool kit. There was nothing special about MyBO Web 2.0 tools. They were garden variety email campaign management, fundraising functions, a personal blog, and local campaign development contacts list. So what is the big deal about using a video to introduce a set of features and functions on the Obama campaign site? 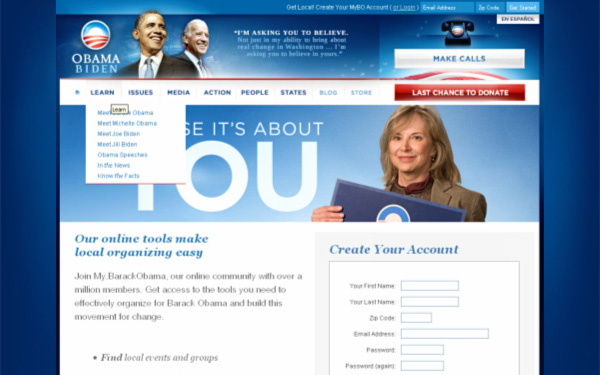 What is important is that a properly conceptualized video is vastly superior to other forms of user experience training and has been shown to impact many aspects of the users’ overall engagement with almost any web site and its related value proposition The Amy video fundamentally solved one of the major issues restricting Web 2.0 tools; how to actually explain to users how to make the MyBO tools work for their (and their candidate’s) benefit. In this simple video, Amy communicated not only the value proposition of the Obama campaign but also how a volunteer could contribute to the campaign’s success by making use of the Web 2.0 technology in the “MyBO” tool set.

How important is a well conceived video in communicating user experience functions like Web 2.0 tools? In a recent study, we compared a traditional web page-based system vs. a well-conceived and tested video for communicating product benefits and teaching basic functions of Web 2.0 technology. The video was preferred by over 80% of those tested. More important, when we examined the group who were only presented the video as the method for communicating benefits and actual UX functions, the video group had significantly more repeat visits, stayed longer on the site, engaged deeper with critical (profit-making) content, and rated the brand much higher on critical attributes. When one applies a bit of demographic analysis to this issue, the reasons for the power of video become clear. What we sometimes fail to realize is that those who started life as the MTV generation 25 years ago are now entering their 40’s, and the current generation is now living in a YouTube video world. Video is the medium and the message. One can see immediately that a vast population of users (translate voters) grew up on video as the primary means for communicating complex or even simple functional concepts and benefits, not static page-based presentations. 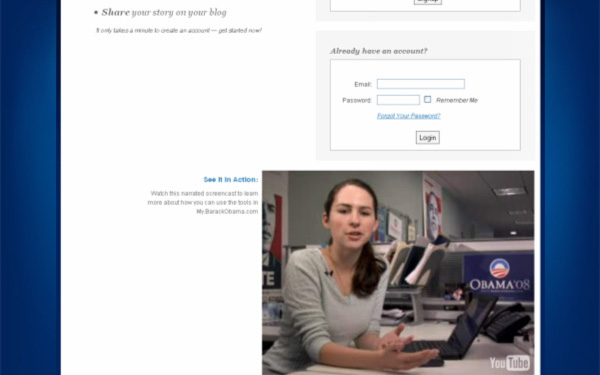 A video is not always just a video

Amy taught us that powerful Web 2.0 solutions are more MTV than CNN. To be clear, it is not simply that a site makes use of video but rather how it makes use of video. Clearly the McCain site was overrun with video. So why was Obama successful and McCain not? The answer lies in the way that video was employed to convey core messaging and to achieve critical political objectives. Obama used video technology to train a vast community of volunteers to recruit and expand his political base by helping them make use of new and powerful social networking tools. Conversely, the McCain campaign used video to sell John McCain. One built a political ego and the other built an army. But the real stroke of genius of the Obama web experience had more to do with a much-abused new science than with the art of an engaging video.

The science of the Uber-Connector

Social networking theory has been so misunderstood over the past eight years as to be rendered almost meaningless as a viable science. However, the Obama campaign understood social networking theory. Therein rests the most important innovation of the Obama web experience. Humming away underneath the set of Web 2.0 tools of the Obama web site was a surprisingly simple volunteer database. In its most basic form, it contained only a few data points like email addresses, zip codes and names. This database may have been at the heart of the Obama victory. It apparently grew daily in a manner that suggested something quite interesting. However, victory was not assured until the Obama infrastructure made use of the most basic concept of social networking theory—finding those individuals on the network known as “uber-connectors”. These are individuals in any social networks who do not necessarily belong to one social group but who move freely between several social groups. They carry critical opinions, attitudes, knowledge and status across the information landscape in ways that we are just beginning to understand. These individuals have become immensely important to corporations selling products and political parties seeking victory.

These individuals are known to be so valuable that having access to them is fundamentally changing the advertising pricing models for traditional media. These are individuals who impact large numbers of other like-minded individuals in powerful ways that sell millions of products, build robust brands and not surprisingly, win elections. They are the new currency of our interconnected world. Yet, they are elusive, hard to pin down, difficult to value in dollar terms. If you try to market directly to them, you will miss them entirely. So how did the Obama campaign cultivate this amazing new resource of uber-connectors?

One of the purposes of the Obama volunteer database was to connect volunteers in a local area for building grassroots support. The connection process was simple. When a volunteer registered, the Obama database would show them a list of other individuals in their area code who were also volunteers. One could then make use of email links in the volunteer MyBO tool kit to connect with these like-minded individuals. Apparently such connections were made on a rather surprising scale: tens of thousands of these local groups were formed by this method in the months leading up to Nov. 4th. What does this have to do with identifying the uber-connectors who really moved the meter for Obama? How did the Obama campaign find these individuals? Going directly to the point—probably by accident.

As it turns out, our firm has been searching for uber-connectors in the traditional and new media space for music, video, TV and movie content. After several studies for leading media companies, we uncovered numerous reliable and interesting insights about uber-connectors. One of the significant predictors of who these individuals are was determined by examining in detail exactly how they feel about Web 2.0 tools. At the most basic level, those who are attracted to and make use of Web 2.0 technology in aggressive and surprisingly creative ways are exactly the uber-connectors any campaign would kill to access and utilize. From the 2008 campaign forward, these individuals will represent a massively important political and social currency. Certainly Obama will want to spend the next 4 years keeping these folks highly engaged with his presidency.

In the end, Amy helped make the MyBO Web 2.0 tools easy to learn and critically relevant for key group of supporters. By doing so, the Obama campaign unwittingly acquired the most valuable currency possible, an entire army of uber-connectors. No wonder Obama whacked McCain on the web! Sometimes making technology easy to learn has world-altering implications. Just ask an Obama uber-connector.